The backstory of Chiropractic

Chiropractic medicine adheres to the evidence based principles of normal physiology. Doctors of chiropractic work with the body’s ability to adapt and function the way it is designed. In the State of Illinois, chiropractors are licensed physicians under the Illinois Medical Practice Act, “licensed to diagnose and treat human ailments without the use of drugs or operative surgery.” Chiropractic physicians can order all of the same diagnostic tests as a medical physician, however their treatments will be natural solutions. Diagnostic imaging, x-ray and MRI, are commonly used by chiropractic physicians.

The starting point matters. You may have heard of “chiropractic philosophy.” This seems a little odd, right? Dentists or optometrists don’t have their own philosophy,do they? What the big deal? Let’s start with a term– salutogenesis. The word means a focus on the factors that support human health and wellness rather than focusing on the factors that cause the disease. Salutogenesis literally means “that which gives birth to health.” Salutogenesis is the opposite of pathogenesis. In medicine, the “pathogenic” perspective is standard. The focus is on the disease or illness, prevention or treatment, and the need for medical intervention. The truth is that both the salutogenic paradigm and pathogenic paradigm are needed. There is a time and place for everything.

Chiropractic philosophy was developed following the inception of the chiropractic profession in 1895. The first chiropractic patient, Harvey Lillard sought help not for low back pain, but hearing loss. 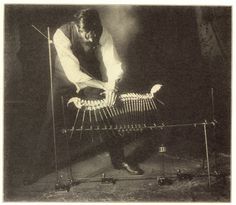 The “adjustment” that D.D. Palmer gave to Mr. Lillard helped. This sent Palmer, and eventually his son B.J. on an exciting adventure, to understand why spinal manipulation was such an effective treatment making made observations from self-evident principles existing in nature, summed up in D.D. Palmer’s axiom “Life expresses intelligence.” This became a philosophical starting point or principle when approaching human health and wellness. To state this point differently, our bodies and all of the natural world are interwoven with a beautifully, mind-boggling complex system that belies an underlying intelligence in its sophistication and design. Chiropractic physicians seeks to further understand and utilize the innate healing mechanisms within the body, allowing the body to self-regulate as much as possible.

Our high-tech society has simplified our lives incredibly– in ways our great-grandparents could never have imagined. The scientific breakthroughs in medicine have been particularly amazing over the course of 2 generations. The great paradox, however, is that as our technology becomes more sophisticated, our lives become more complicated. With all of our technological comforts we have no time and very little peace. Technically, it is machines that pollute and harm the environment, not humans. We are organic and can return to the soil very nicely after we perish. We live in an age of artificial intelligence(AI), artificial social interaction (social media) and an overly mechanized civilization and the loss of a “Culture of Life” as the human person becomes increasingly extracted from organic and natural existence.

The scientific data validating the safety and efficacy of spinal manipulative therapy( SMT), a.k.a. the “chiropractic adjustment,” continues to grow. In light of our nationwide Opioid Crisis, The FDA and the American Medical Association now recommends that primary care physicians consider chiropractic as a front-line treatment for patients suffering from low back pain

So, tying this all together leads to a very simple idea: try natural solutions first and give it a chance to work. If its not working within a reasonable period of time, progress to the next level of invasivity or medical intervention.

The doctors at Nova Rehabilitation Acupuncture Chiropractic will help you maximize your body’s natural ability to heal and stay strong.

All of Our Other Services